Coronavirus should not make investors panic. But it should make them do this 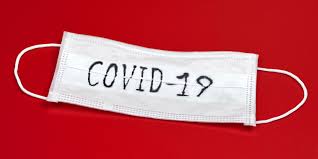 Stock markets around the globe were rocked on Monday as fears of the coronavirus spread. The outbreak has now spread to Europe while officials in South Korea raised its coronavirus level to the highest level following an increase in confirmed cases in the country.

The economic and market backdrop is always full of uncertainty because no one knows what will happen in the future. There’s never been a time in human history where certainty prevailed. But a virus like this one adds in an element of certain uncertainty. We know it’s out there, we just don’t know how it will play out.

The Center for Disease Control estimates there were roughly 140,000-810,000 hospitalizations and 12,000-61,000 deaths annually caused by the flu in the United States alone since 2010. And this is just the run-of-the-mill flu, which typically inflicts the most pain on the elderly and infants.

The worst influenza pandemic on record is the case of Spanish Flu in 1918. While it’s called the Spanish Flu because there was a severe outbreak in Spain, experts now believe the disease was actually started in a small town in Kansas. It spread worldwide because so many U.S. soldiers were on the move during World War I.

The global economy was already experiencing a shock from the onset of the Great War, but the influenza pandemic basically ground things to a halt in many areas. Schools, businesses and churches were closed to slow the spread of the deadly disease.

It didn’t matter. Today experts estimate the outbreak caused somewhere in the range of 50 to 100 million deaths worldwide. And this occurred during a relatively short period, from January 1918 through February 1919.

Surprisingly, a combination of a world war and the worst pandemic to ever strike the modern world somehow failed to knock down the stock market very much. This is a look at the Dow Jones Industrial Average in 1918 and 1919: 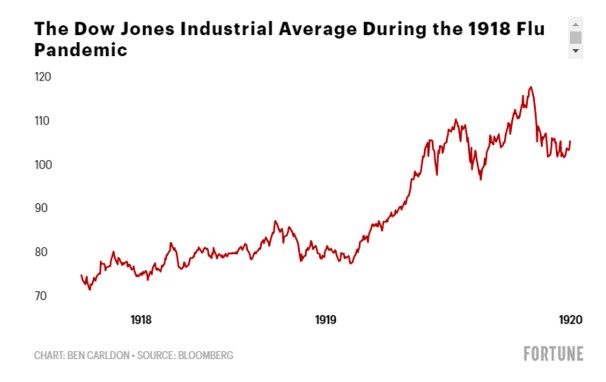 The worst peak-to-trough drawdown during this time was a correction that came close to 11%. While the pandemic wreaked havoc on the entire globe, it was over by February, roughly a year after it began. In 1919, the Dow was up more than 30%. These numbers do deserve some context. The Dow was down 40% at one point in 1917 so that was a completely different situation from today where stocks are still within a stone’s throw of all-time highs.

The problem with using history as a guide in these instances is there are too many different types of pandemics to make comparisons to present-day useful. Influenza pandemics are surprisingly more common that people would think. In his book The Great Influenza, John Barry describes how common it is for new flu epidemics to break out:

“One study found nineteen discrete, identifiable epidemics in the United States in a thirty-three-year period—more than one every other year. Each one caused between ten thousand and forty thousand “excess deaths” in the United States alone—an excess over and above the death toll usually caused by the disease. As a result influenza kills more people in the United States than any other infectious disease, including AIDS.“

So influenza is already a huge problem. The problem simply becomes more heightened when a new form of the disease spreads wide and fast.

The financial ramifications from the coronavirus are impossible to pinpoint because no one knows how long this will last or how far it will spread. The virus is too unpredictable to make accurate assertions about the markets or global economy. And even if we did know the full extent of the potential damage, you never know how the market will react to the news. Any prognostications as to the economic or market impact at this point would be complete guesses.

It’s easy to tell people not to panic when something like this flares up but the truth is panicking is never the right move to make when it comes to managing your money. Trying to predict the unpredictable has one predictable outcome—it increases the odds of making a mistake with your portfolio.

The S&P 500 is just 4% from all-time highs. So instead of panicking, the best move to make right now would be a reassessment of your pain threshold in the markets. If you can’t handle the gyrations involved from the uncertainty surrounding something like this when markets are near all-time highs, there’s no way you’ll be able to stay the course when markets get hit for real.

Making changes to your investment stance based on news headlines is rarely the right move. But sometimes the news headlines can provide a dose of reality for those investors who miscalibrated their tolerance for volatility and potential losses in the markets.

Ben Carlson, CFA is the Director of Institutional Asset Management at Ritholtz Wealth Management. He may own securities or assets discussed in this piece. | fortune.com